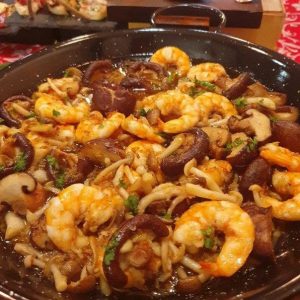 Denise Campos
Nothing quite as simple as Gambas to introduce your taste buds to Spanish cuisine. Untraditional Gambas al Ajillo..con Setas, to contribute some of that earthiness from the different kinds of mushroom, and kick from the chili flakes. It's a nice, simple straight forward introduction to what Spanish cuisine is like. Fresh, full of flavour and easy to enjoy. Take it to the next level and pair it with a glass of Sauvignon Blanc from arguably Spain's leading white wine producing region - Rueda, just northwest of Madrid. Or if you want to keep it casual, a bottle of Estrella Galicia wouldn't be such a bad idea either.
5 from 3 votes
Print Recipe Pin Recipe
Prep Time 20 mins
Cook Time 20 mins
Total Time 40 mins
Course Appetiser, Small plate, Starter, Tapa
Cuisine Appetiser, Mushroom, Seafood, Shrimp, Spanish, Tapas
Servings 4 -5 people
Calories 420 kcal

Now you know how to make Gambas Al Ajillo Con Setas. Would you like to try cooking it?